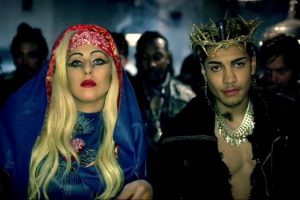 The video for Lady Gaga’s song “Judas” has premiered, ending weeks of speculation stirred up by several religious spokespeople who denounced it before seeing it. The video is set in a motorcycle gang; Jesus is the leader, Judas a thuggish member and Gaga is torn by her attraction to both. As a quick first reaction, I find it moving, both artistically and spiritually. What has always fascinated and frustrated me is the disconnect between the Gaga haters and what I, and some of my friends, see in her work. Many of my religious young adult friends love Gaga; most of the rest don’t have any serious problem with her. They understand what she’s trying to do, even if it isn’t their taste. This is true across Catholics, mainline Protestants and evangelicals. So, what is it about Gaga that excites one devout person and intimidates another?

Some insist Gaga exploits Christian and especially Catholic symbols for shock value, rather than admitting they could be part of an honest attempt to wrestle with spiritual issues. I think some critics simply have trouble believing someone like Gaga could be sincere. Or perhaps it’s just the easiest way to dismiss her work. Don’t get me wrong. I cringed watching her dressed in a fetishized nun costume in the Alejandro video, which among her hits so far had the least redeeming value. But I do think she was sincerely trying to express something, to externalize her struggles through the imagery.

In the “Judas” video, Gaga (apparently as Mary Magdalene, though some story lines are blurred together in both the lyrics and the video) rides with Jesus in a motorcycle gang, while pining after bad boy Judas, a beer-guzzling thug who’s also in the gang. We see Gaga turning away from Judas in favor of Jesus again and again. At one point, she washes Jesus’ feet just before the most notable lines in the song:

I wanna love you,
But something’s pulling me away from you.
Jesus is my virtue,
Judas is the demon I cling to.

Lady Gaga’s creative director, Laurieann Gibson, described the creative process the team went through in completing the “Judas” video this way: “It was amazing because to have that conversation about salvation, peace and the search for the truth in a room of non-believers and believers, to me, that was saying God is active in a big way.”

This is not the stuff of pop music. It’s a cultural phenomenon. And that perhaps is where we get to the root of the problem some have with Gaga. Unlike any other current pop star at the global level, Gaga writes about, talks about and openly struggles with spiritual issues in almost every song she writes. Most shocking in our current culture, she mentions Jesus by name. In Judas, she says “Jesus is my virtue.” In “You and I,” about an old boyfriend she calls Nebraska, Gaga says, “There’s only three men I served my whole life / It’s my dad and Nebraska and Jesus Christ.”

So while some may like to dismiss her as disingenuous, it is exactly Gaga’s genuineness that is a threat. While an R&B artist singing crudely about sex is clearly defined in their role outside the spiritual conversation, Gaga dares to jump right into the middle of it. And while she’s there, with a bully pulpit speaking to millions, she dares to say things like, “I’m beautiful in my way, cause God makes no mistakes.” This is much more dangerous in some people’s minds than empty pop music. Gaga calls her fans little monsters, her way of saying we are all fallen, all flawed, and that it is the misfits of society who can teach the comfortable a thing or two about God’s love and compassion. And that’s what she’s doing.

22 replies on “Gaga and Judas”

Interesting perspective…I’m inclined to agree with you.

I can see your point of view, but it’s no coincidence that this song’s planned release was Holy Week. I just can’t agree that she is wrestling with anything other than what’s going to give her the most attention.

There is a big difference between openly struggling with spiritual issues and outright blasphemy. The line has been crossed here,

I’d take her spiritual struggles more seriously if she wasn’t doing it while dancing in her panties surrounded by half naked dancers. It’s shock and awe…oldest trick in the pop music book…becoming more shock and awful as we go along.

It makes sense. I don’t understand how people cannot accept her talent, while they accept the non-talents that have over run the mainstream music scene; the auto-tune invasion and all the sex shooting across the sky why she says ah ah ah, while Kanye is disrobing and probing women. How is all of that acceptable to people and a genuine heart that Gaga is, is not accepted? Are people afraid of her message that we should be free and love ourselves for who we are? Do we instead want to keep people under the auto-tune spell of womanizers and violence? Anyone who does not accept her message is just plain ignorant and deserves no real attention or possesses no real value to society.

I don’t accept her message. Yet you will read my post and pay attention. Do we really need this kind of material in our lives? The world will forget her name in a few years, just as Madonna is now almost forgotten. Why would we (believers as we are) need to even discuss her acts? By doing so we provide what they look for: attention. But, is it so necessary to appreciate her work? Isn’t it just more of the daily nonsense the Media feeds us?

I am in my middle 40’s and a huge Gaga fan. I was afraid of what “Judas” might be, but thank you for a great article! I agree!

It is not even a religious question in my opinion. The woman has zero talent, or she hides it extremely well at the very least. Her so-called music is ridiculous.

Good grief, it’s just like with Madonna. If you don’t like what Lady Gaga does, everyone thinks you’e an intolerant SOB!

While I’m planning to keep listening to Bach and Beethoven, this article fills me with hope and reminds me (because I so often forget) that to develop any understanding others we have to dig deeper than looks or increasingly, just the sound/sound bite.

“Gaga calls her fans little monsters, her way of saying we are all fallen, all flawed, and that it is the misfits of society who can teach the comfortable a thing or two about God‚Äôs love and compassion. And that‚Äôs what she‚Äôs doing.” We ARE all fallen, she’s right. The problem is she’s celebrating it. Name any church, any denomination, where the pastor asks the congregation, en masse, to happily identify themselves as fallen. Jesus didn’t call the woman at the well “little harlot” he called her nothing, and instead offered her a life, and view of life, more beautiful than she ever imagined. THAT is was GOOD ART is supposed to do. Lead us to God, not lead us to gregarious self-congratulation… that’s called pride.

Why can’t we accept that an artist like Lady Gaga reaches some people who would never be reached in any other way? She has a message–her song, “Born This Way” is enormously important to folks in the gay community and outside of it. You don’t have to like her, just think about whether she is reaching some people, maybe softening their hearts a little as she talks about Jesus….

I am sorry to say but I am not interested in the least bit in Lady Gaga and I do not like most anything that she has written or videos that she has made. She is just not my style or music taste.

So explain all the satanic and illuminati symbols and actions in her video’s? Really don’t think she is about promoting christianity and God. I’m not drinking the Kool-aid and buying into this translation…..considering all her blasphemy in other vid’s.

Never mind the upside down crosses at her crotch in many vid’s she does, etc ??? The checkered illuminati floor…the satanic goat heads on the walls in her video’s ….checkered wall behind them many times….the upside down crosses….the satanic and illuminati hand signs….on and on it goes…the horns on her cheek bones and forehead…the egg hatching reptillian thing….yeah, right…..that’s all good?
Do we live on the same planet?

I saw Lady Gaga in concert on Good Friday…I know, I know, but I bought the tickets without knowing what day I was going to go to…I have a love/hate thing going on with Lady Gaga. Her music is hypnotic to me.

While there she mentioned her guitarist in which she says he is just like Jesus; “All the girls and all the boys love him.” Gaga is basically Madonna 2.0 and is more edgy than Madge.

I actually was afraid of what I would see in the Judas video but I did not find it as offensive as her previous work. Jesus is my virtue…Amen.

C Morre, I think you hit the nail on the head. The mix of satanic and illuminati symbolism with Christian symbols really raises questions about the intention & message behind her music. The entertainment industry is propagating an evil agenda and we can’t take music like this at face value. I think this song shows much much more than just Gaga’s spiritual struggle

I still don’t understand her. She’s just not my cup of tea.

The bottom line is that Lady Gaga is someone whom thousands of young people look up to. And while I can appreciate that she is honest about her spiritual struggles, the fact remains that she offers nothing more. She doesn’t provide any direction to her listeners – she doesn’t offer any message regarding the fact that Christianity is the only means of salvation.

The marginalized of society, those who don’t actually know the message of the gospel aren’t getting anything meaningful from her music. We recognize the importance because we are already Christians, but to say her music is a vehicle for bringing others to Christ or helping them to recognize their own struggles is inaccurate. And if she’s not carrying the message to others through her music, then I can’t say it has any value beyond a good beat.