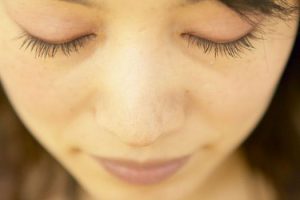 It’s remarkable (though not really) how easily we can forget the emotionally charged things that happen in a day. The problem is that if we aren’t resolving them we aren’t really forgetting them. Take this example: a few weeks ago, I was having a delightful weekend day in the country. After brunch with a friend and an invigorating hike in the multi-hued autumn woods, followed by a relaxing evening preparing a home-cooked meal and curling up with a fun movie, I prepared to do the examen thinking it would be awfully quick, since it had been such an uneventful and pleasant day. Five minutes later, I found myself immersed in the recollection of a phone call I had gotten but not picked up during brunch, which had set off a torrent of resentment-fueled anxiety-based planning and worrying. Nothing had actually happened — I had taken no actions — but it had been a roller coaster for sure. Hours later, I had completely forgotten the storm that had run through my mind for 15 minutes or so. Thanks to the examen, I was able to see it for what it was and resolve to sort it out. If you’re like I was for most of my life, your reaction to this story will be, “Why not let sleeping dogs lie?” But that old saying contains the answer: That dog may be sleeping, but it’s waiting to wake up and bite you. If the fear had remained buried, it would have percolated under the surface, waiting to flare up again at the next trigger.

I cannot possibly do justice to the great Ignatian spiritual tool, the examen of conscience, in a thousand words; nor can I improve on explanations offered by many before me. But consider this column a pointer, a nudge, to learn more about it.

There are many good sources of information about the examen. Here are a few:

My main concern is not exactly how you do it, but that you do it. There are various ways to practice the examen, and there are other types of spiritual daily reviews. The best known is associated with twelve-step programs. Find one that seems to fit you.

Realize though that the examen is one tool. The real power comes when you combine it with morning prayer, a regular contemplative practice, and stopping whenever you feel agitated — using HALT, the Welcoming Prayer, or just pausing and praying, “Thy Will be done.”

You will stray from the path, but with these aids you get better at noticing when you do and correcting your course before you lose sight of the way, before any real damage is done. And gradually you change interiorly so the course corrections are needed less often and come almost immediately when they are.

It’s helpful to set aside the same time each day, or the same point in your day — just before bed; between work and home; dinner and anything else — so that you make the examen a routine which isn’t a struggle to fit in every time. It’s also helpful to establish a sacred space of some sort around it. Ritual helps to establish habits.

First, affirm you are in God’s presence while you pray.

Then, recall those moments in the day where you felt God’s grace, or simply felt good, or where good things happened whether you recognize them as being of God or not: those moments in the day where you felt serene, without fear and anxiety, connected. Don’t just remember such moments but re-feel them and relish those feelings. As Fr. Jim Martin puts it in The Jesuit Guide to (Almost) Everything, “savoring is the antidote to our increasingly rushed lives.” It’s so easy to forget these precious moments and dwell on the things that give us anxiety. The examen can help us through a “deepening of our gratitude to God, revealing the hidden joys of our days,” says Fr. Jim.

Love is patient; love is kind; love is not envious or boastful or arrogant or rude. It does not insist on its own way; it is not irritable or resentful; it does not rejoice in wrongdoing, but rejoices in the truth. It bears all things, believes all things, hopes all things, endures all things.

Where was I patient today? Where was I kind? Was I envious? Boastful? Arrogant? Rude? Did insist on my way in a situation today? Was I irritable with someone? Resentful? Did I delight in anything dishonest or unethical? Where did I rejoice in the truth? Where was I in total acceptance? Faithful? Hopeful? Tolerant?

As you continue in the examen, identify those moments in the day when you strayed from God’s grace — diverged in thought, word or deed. We all have an inner guidance system, which gets uncomfortable when we start down a path of selfishness and fear. Sometimes we don’t hear it, sometimes we drown it out with fear-based messages, and sometimes we openly defy it. But in the examen, you pause and reflect back through the day and recognize those moments. This is the heart of the examen, but it’s essential to do the positive part too.

Lately, at the suggestion of a friend, I’ve been using 1 Corinthians 13:4-7 for these “positive and negative” recollection phases, turning each phrase into a question. (See the sidebar.)

When talking about these matters, twelve-step programs use the morally neutral language of a business inventory. Say you own a grocery store and, taking inventory, you see a can of peas on the shelf that’s past its expiration date. You wouldn’t say, “I’m such an idiot!! How could I have let that happen! I don’t deserve to own this store. Why do I even bother?!” (At least I hope you wouldn’t!) No, you would simply throw it out, and perhaps make a note to buy less peas next time. The purpose of an inventory is to get an accurate picture of things in order to make better-informed decisions in the future. If time after time, every inventory shows dramatic losses based on poor planning, you need to look at that. But even that is just useful information.

Do not let the sun go down while you are still angry, and do not give the devil a foothold.

Examine yourselves to see whether you are living in faith. Test yourselves. Do you not realize that Jesus Christ is in you?

“It is proper for a person who fears God to examine all his actions of the previous day before he goes to sleep. Should he discover that he committed a sin, he should express his regret, confess and wholeheartedly resolve not to commit the sin again. One should pay special attention to sins which are frequently committed, e.g., flattery, falsehood, mockery and slander. Also, a person should forgive any colleague who wronged him, so that no other person will be punished because of him… Finally, one should repeat three times: ‘I release all those who caused me distress’…”

Be neutral in this way. Did you drift from God and slip into a fear-based state that led to feeling threatened by someone at work and snapping at them? Note that. My example in the opening paragraph was nothing but a thought but it was easily as damaging as an action. Note that too. With the examen, you have the benefit of remembering or realizing these things, and determining how to make them right, or at the very least to be more aware in the future.

Next, run through your day and consider the key events. You might not think of them as moments where God was particularly present or absent, but you might see more in them now. You might also simply realize how much (or how little) you accomplished. Humbly seek God’s forgiveness for falling short of the ideal this day, resolve to make amends or take other actions where needed to resolve any issues that have come up, and ask God’s help to do so. Close with a prayer.

Consider adding the examen to your spiritual routine. Don’t drop it the first time it gets uncomfortable or inconvenient. Give it a shot. Take a look at the resources in the sidebar for some ideas. Do you already use the examen or another daily review practice? Share your experiences with it below.

2 replies on “What Works: The Examen”

I’m new in the program and battling with all the defects, but got a bit of a better view of it all now! Thank You

Among the many form of the examen, I find this website most helpful: Jesuit Consciousness Examen New Orleans Province.