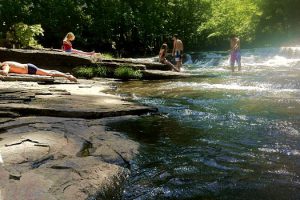 A June 30 NY Times Opinionator blog post by Tim Kreider called “The Busy Trap” created a lot of buzz among my friends, shared on Facebook with comments like, “If you read only one thing, ever, read this.” (Sorry, Emily.) A thread of professional jealousy made me want to respond to each friend’s enthusiastic share with the snarky comment, “I refer you to my 2009 column ‘How Sweet To Do Nothing,'” but I resisted. And I wanted to find fault with the post, but I could not. Its main themes are ones I touch on regularly, and it addresses them well.

This plague of busyness is a First World problem in the extreme:

Notice it isn’t generally people pulling back-to-back shifts in the I.C.U. or commuting by bus to three minimum-wage jobs who tell you how busy they are; what those people are is not busy but tired. Exhausted. Dead on their feet. It’s almost always people whose lamented busyness is purely self-imposed: work and obligations they’ve taken on voluntarily, classes and activities they’ve “encouraged” their kids to participate in. They’re busy because of their own ambition or drive or anxiety, because they’re addicted to busyness and dread what they might have to face in its absence.

And Kreider points out that it’s rooted in part in the Puritan legacy of thinking productivity is divine (which observation includes my favorite line from the post):

The Puritans turned work into a virtue, evidently forgetting that God invented it as a punishment.

It’s quite likely that in some future century, folks will look back at this moment in Western civilization and wonder why we burnt ourselves out the way we do.

As I put it in my old column:

The seeds were planted centuries ago with the Puritan work ethic — epitomized by Isaac Watt’s 1700s hymn for children praising the worker bee, which includes the lines:

In works of labour or of skill,
I would be busy too;
For Satan finds some mischief still
For idle hands to do.

Perhaps the most important message in the Times piece, though, is this:

The present hysteria is not a necessary or inevitable condition of life; it’s something we’ve chosen

Different societies and different generations have different ways. When you’re in the midst of one, it’s easy to think this is life. Or at minimum, this is “normal” life. New monastics and others who promote a less materialistic life may seem like they’re presenting something exceptional, something for advanced spiritual types, but it only seems odd because it’s so out of step with our prevailing culture today. It’s quite likely that in some future century, folks will look back at this moment in Western civilization and wonder why we burnt ourselves out the way we do; why we didn’t just take it easier; why we took so many things so seriously that really didn’t matter that much.

The main difference between my work on leisure and Kreider’s is one of perspective. He is writing as part of a series of posts labeled “anxiety,” and is speaking from the perspective of someone caught up in the lack of ability to do nothing. I, on the other hand, find little trouble doing nothing. I’m a natural slacker (though I suppose that term is inherently judgmental.) Doing nothing is a regular feature in my life.

I practice a sabbath: one day a week when I do no work-work (with exceptions — I’m not absolute about it if needs arise).

I spend most mornings and working hours in silence. When I’m in the country and go kayaking or take a hike, I can be offline and out of cellphone reach all day, and that doesn’t bother me one little bit.

Often in the evening and always at night, I leave my phone on vibrate in the kitchen.

Of course, I do things all the time, but when I do something, it is usually by choice.

I think Kreider’s angle as a fellow sufferer is one of the reasons the Times piece is so popular — people identified with the author’s struggle. They see themselves more in his inability to live up to what he’s celebrating than in my ease with it. I see a similar dynamic with the frequent grousing about social media because of the issue of its overuse. To both, I find myself thinking: Just say no. Just set time aside. Just use Facebook as the amazing tool for human connection that it is.

But I can’t help noticing how similar that sounds to saying “just say no” to an alcoholic or addict. Having been on the other end of that one, I have to honor that many others find it near impossible to enjoy doing nothing, or to just be, or to enjoy the fruits of social media without being sucked into compulsive behavior.

So, for two very different perspectives with very complementary conclusions, I encourage you to read both pieces: Kreider’s and mine. I offer myself, on these issues, not as a fellow traveler so much as a keeper of the faith. I can speak to you of the benefits of doing nothing, but more like a monk speaking of silence than a partner in the struggle.